Migraines are more than just terrible headaches; they are extreme pains with nausea along with other symptoms. Aside from the pain in the head, migraines are often connected with many other disorders such as depression, fibromyalgia, and even obesity. Sometimes, however, migraines can show symptoms that don’t present as the typical symptoms – especially in children.

Children’s symptoms from migraines feel similar to those of their adult counterparts, however because children translate pain differently than adults it’s important to recognize the symptoms early to give children the best possible options for relief. For children, especially boys, migraines occur in about 10% of those under the age of 10. Oftentimes, pain in the head is not the most dominating symptom for children. Symptoms to look for are:

Other indicators can come in the form of behavior changes during the onset of a migraine. These include:

Once diagnosed, treating migraines in children can come from a variety of resources. One of the main triggers for migraines and the associated symptoms is lack of sleep or deprivation of sleep. The best treatment for juvenile migraines begins with structured sleep patterns and routines. Most children need at least 8 to 10 hours of sleep for proper function, however many need even more than that to really reduce migraine symptoms.

Another option for treating migraines in children is to incorporate a balanced diet without skipping meals that includes healthy Omega-3 fatty acids, riboflavin, and magnesium. Proper hydration will also help prevent major migraine onset. 6 to 8 glasses of water a day will greatly reduce both the onset and the severity of a migraine for a child. Avoid processed sugar that is often found in sugary drinks and common kids snacks as this can sometimes bring on some migraine symptoms.

While there are a number of medications that can be used once a child is diagnosed with migraines, there are also a number of natural and herbal supplements that may provide as much relief as medication. Some herbal remedies to include are butterbur, magnesium, riboflavin, CoQ10, and feverfew. Finally, adding some basic relaxation routines for children like kid-based yoga or quiet time breathing can provide substantial relief for children that are willing to slow down long enough to employ them. Avoiding long term eye strain from computer screens, TVs, and mobile devices are also a good starting point to ending migraine symptoms for children.

Children feel pain differently than adults, they translate pain differently, and most importantly they explain pain differently. Diagnosing migraines may be tricky for a parent, but looking for notable symptoms and trusting instincts, parents can be the best medication for their children’s migraine symptoms.

(2340)
MIGRAINE PAIN-FREE SUPPORT – Migravent is recommended by Migraine Pain Relief Clinics to use a Migraine Supplement. Throughout the USA and was proudly... read more
(as of January 23, 2022 - More infoProduct prices and availability are accurate as of the date/time indicated and are subject to change. Any price and availability information displayed on [relevant Amazon Site(s), as applicable] at the time of purchase will apply to the purchase of this product.)

(1394)
Your Powerful Natural Migraine Relief Support: Suffering from a constant headache? Get natural chronic pain relief from migraines with Naticura Migrat... read more
(as of January 23, 2022 - More infoProduct prices and availability are accurate as of the date/time indicated and are subject to change. Any price and availability information displayed on [relevant Amazon Site(s), as applicable] at the time of purchase will apply to the purchase of this product.) 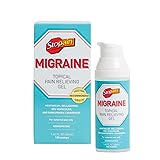 (1545)
$12.62 ($7.79 / Fl Oz) $11.92 ($7.36 / Fl Oz)
MIGRAINE RELIEF IN MOMENTS: Topical migraine gel from Stopain offers relief more quickly than many migraine medications & is effective at any stage of... read more
(as of January 23, 2022 - More infoProduct prices and availability are accurate as of the date/time indicated and are subject to change. Any price and availability information displayed on [relevant Amazon Site(s), as applicable] at the time of purchase will apply to the purchase of this product.)