I was always a bit fatigued, but it became extreme last spring, 2012. I began feeling depressed and felt a heavy pain that I had not experienced before. There was even some anxiety involved. After a few doctors and many tests, the diagnosis was handed down – Fibromyalgia.

As a certified Holistic Health Coach the prescribed medication was not an option for me. My first question to the doctor was about the medication he suggested knowing one of the side effects was weight gain. I asked him how would I move my body –  even go for a walk – if I gained weight, resulting in possibly feeling even worse (which I didn’t think was possible at the point in time). His simple answer was that I probably would gain weight and walking wouldn’t help me. My gut told me otherwise. I had in hand a diagnosis that helped me to have a name for what I was up against.  I searched for the direction in which I would go forth with my healing.

After a long road I would say that I am recovered, although any period of stress will bring on symptoms.  Then it’s time to kick back on the self-care. One of the most important things in my personal recovery was being and staying active with regular exercise.

At first, it was difficult. How do you move and exercise when you can hardly walk without pain and your fatigue feels like a heavy fog weighing you down? But I knew exercise would help. Knowing the bodyand how the systems work together, synergistically, not separately, I knew that movement and exercise would help me – and it did.

First, I began slowly. I would walk up and down the street. I felt frustrated and tired. But I was consistent. Each day I would move and stretch. I added yoga and just did it until I wanted to stop – not until I physically could not. It was important not to overexert, but to warm up my body gently.

It turns out exercise is an amazing antidote for stress and relieving stress is a big YES when it comes to healing fibromyalgia. Being physical also turns on natural endorphins  – the body’s natural opiates. Like a drug, endorphins are released during exercise and can help reduce pain from – you guessed it –the symptoms like those of fibromyalgia. Endorphin release from exercise also helps reduce anxiety, stress and depression. Natural balancers are exactly what they are.

Many of the body’s own chemicals are helpful in the treatment of fibromyalgia. Taking serotonin for instance. This little neurotransmitter aids in regulating sleep cycles, mood, pain perception and immune system function. I found it interesting how 5-HTP is a well-known and useful tool in the treatment of fibromyalgia and was very helpful in my own treatment. 5-HTP works in the brain and central nervous system by increasing the production of serotonin. Do you know what else helps increase production of serotonin? Exercise. Regular physical activity increases levels of tryptophan, which is used by the body to create serotonin.

How do you get started? First always make sure that you speak to your doctor and get the ok to begin an exercise routine. Keep it simple. Begin with walks, and add in some yoga poses for stretching and muscle strength. Be kind and loving with yourself. There will be days you feel like you can conquer the world, while others you will feel like five minutes in you can no longer do it. Each day will be different. Just be consistent and show up to exercise every day. It’s up to you to begin to take those baby steps and incorporate physical activity into your healing plan.

Gina Wieboldt is Certified Holistic Health Coach accredited from Institute of Integrative Nutrition. She’s also a mom and blogger. Read more about her at http://goodlifehealthcoaching.com

DOCTOR AND PHARMACIST RECOMMENDED - Our patented fibromyalgia Pain relief rub is recommended by doctors and pharmacists, because our healing technolog... read more
(as of May 20, 2022 11:23 GMT -04:00 - More infoProduct prices and availability are accurate as of the date/time indicated and are subject to change. Any price and availability information displayed on [relevant Amazon Site(s), as applicable] at the time of purchase will apply to the purchase of this product.)

FAST RELIEF: Perfected formulation of beneficial herbs, vitamins, minerals, fatty acids, and other high-quality ingredients to provide you with an eas... read more
(as of May 20, 2022 11:23 GMT -04:00 - More infoProduct prices and availability are accurate as of the date/time indicated and are subject to change. Any price and availability information displayed on [relevant Amazon Site(s), as applicable] at the time of purchase will apply to the purchase of this product.) 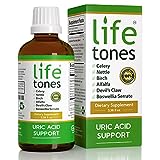 (2887)
$39.95 ($11.82 / Fl Oz)
URIC ACID RELIEF - Lifetones metabolizes uric acid levels and helps to reduce aches, pains, irritation, and inflammation by removing the uric acid tha... read more
(as of May 20, 2022 11:23 GMT -04:00 - More infoProduct prices and availability are accurate as of the date/time indicated and are subject to change. Any price and availability information displayed on [relevant Amazon Site(s), as applicable] at the time of purchase will apply to the purchase of this product.)