Our bodies are geared towards balance, or homeostasis. Fibromyalgia syndrome (FMS) represents a condition where our bodies are significantly out of balance. A holistic approach examines all of the body’s systems, as abnormal functioning of one or more of these body systems can contribute to FMS. A vital organ whose function should be further evaluated in anyone with FMS is the thyroid gland.

Millions of Americans are affected with a condition called hypothyroidism, which is an under-functioning of the thyroid gland. The most common cause of an under-functioning thyroid gland is due to a condition called Hashimoto’s thyroiditis. This autoimmune condition most commonly seen in women causes antibodies to be produced that can destroy the thyroid gland over time. In particular Hashimoto’s thyroiditis is associated with certain antibody tests as measured on blood work, including anti-thyroid peroxidase antibodies (anti-TPO) and anti- thyroglobulin antibodies. Research suggests that these antibody tests – if positive – can increase the risk of developing other inflammatory conditions, especially FMS.

In one study, forty six people that were diagnosed with Hashimoto’s thyroiditis also tested positive for these antibodies. Of those approximately sixty percent of them were also diagnosed as having Fibromyalgia syndrome. What can we deduce from this study? If you are diagnosed with fibromyalgia syndrome, strongly consider having your thyroid function tests checked, and insist on having the above antibody tests checked. The data suggests that you may be at higher risk of developing FMS.

In addition, if you are diagnosed with Hashimoto’s thyroid disease, especially if the above antibody tests are positive, also consider eliminating gluten from your diet. There is a connection between gluten and autoimmune thyroid disease. In one study, a random group previously diagnosed with Hashimoto’s thyroiditis underwent biopsy of their small intestine to evaluate for possible gluten sensitivity. Approximately fifty percent of those who underwent biopsies demonstrated increased activity of their immune system which was attributed to be due to gluten. In another study from the Netherlands, the authors established a connection with Hashimoto’s thyroiditis and celiac disease and recommended screening those diagnosed with autoimmune thyroid disease for celiac disease.

The holistic treatment of fibromyalgia should not just be geared towards the mitigation of symptoms. We must remind ourselves that our body is interconnected and the goal of healing becomes of restoration of our whole body back into balance. As this article points out, a close look at the thyroid is important.

by Dr. Rich Snyder, DO

$14.99 ($2.50 / Ounce)
DOCTOR AND PHARMACIST RECOMMENDED - Our patented fibromyalgia Pain relief rub is recommended by doctors and pharmacists, because our healing technolog... read more
(as of April 21, 2021 - More infoProduct prices and availability are accurate as of the date/time indicated and are subject to change. Any price and availability information displayed on [relevant Amazon Site(s), as applicable] at the time of purchase will apply to the purchase of this product.)

(619)
$49.99 ($0.42 / Count)
FAST RELIEF: Perfected formulation of beneficial herbs, vitamins, minerals, fatty acids, and other high-quality ingredients to provide you with an eas... read more
(as of April 22, 2021 - More infoProduct prices and availability are accurate as of the date/time indicated and are subject to change. Any price and availability information displayed on [relevant Amazon Site(s), as applicable] at the time of purchase will apply to the purchase of this product.) 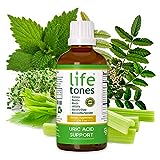 (2076)
$44.95 ($13.30 / Fl Oz) $39.95 ($11.82 / Fl Oz)
URIC ACID RELIEF - Lifetones metabolizes uric acid levels and helps to reduce aches, pains, irritation, and inflammation by removing the uric acid tha... read more
(as of April 22, 2021 - More infoProduct prices and availability are accurate as of the date/time indicated and are subject to change. Any price and availability information displayed on [relevant Amazon Site(s), as applicable] at the time of purchase will apply to the purchase of this product.)