Do you have fibromyalgia? Are you thinking about becoming pregnant? If you have fibromyalgia and are planning on becoming pregnant, then you need to develop a detailed and personalized plan with your healthcare practitioner(s) before you decide to move forward. One of the biggest symptoms that women can experience during their pregnancy is worsening fibromyalgia symptoms and this article will provide some suggestions in coping with the pain associated with it.

As you may be aware, a woman’s physiology changes during pregnancy. The “supporting ligaments” in the pelvis are more relaxed (in part due to a hormone called relaxin). There are changes to the overall body mechanics due to pregnancy that can also alter your structural alignment. This is the cause of worsening pain for fibromyalgia patients, including to the back and the pelvis.

What can you do to help minimize the fibromyalgia symptoms during your pregnancy? Again, proper planning is important. One recommendation is enlisting the aid of an osteopathic physician skilled in osteopathic manipulative therapy, or OMT, for short. Studies have demonstrated that OMT can help not only relieve back pain (especially in the third trimester) but also pelvic pain, both of which can be worse especially in the latter trimester. It is likely that as you proceed through your trimesters you will require more frequent sessions with an OMT specialist to keep your body in structural balance.

In addition to the OMT specialist who can really help with pain and discomfort in the back and pelvis, consider the addition of a reflexologist. A good reflexologist can help you decrease the severity of the pain in those “tender points” that are associated with fibromyalgia. One study demonstrated that weekly reflexology sessions can in fact decrease the severity of pain in highly prevalent areas including the arms, neck, and head.

For those areas that are still causing you some pain, consider the use of acupuncture, which is especially effective at reducing the pain of those “tender points” seen with fibromyalgia. If you are averse to “needles” then consider adding acupressure to your regimen.

Can yoga be performed safely during pregnancy? Yes, but of course it will need to be modified because of your pregnancy, but it can help you with your pain. A study from the Journal of Alternative and Complementary Medicine demonstrated that yoga was more effective than simple posture based exercises at reducing low back and pelvic pain.

Concerning the use of natural supplements or herbal remedies to relieve pain during pregnancy, the use of many are contraindicated during pregnancy. When using natural supplements at higher than low levels, you need to be careful. I tend to advocate for the above therapies to help with pain; I believe that a combination of therapies, including OMT and reflexology, complement each other very well.

$14.99 ($2.50 / Ounce)
DOCTOR AND PHARMACIST RECOMMENDED - Our patented fibromyalgia Pain relief rub is recommended by doctors and pharmacists, because our healing technolog... read more
(as of January 20, 2021 - More infoProduct prices and availability are accurate as of the date/time indicated and are subject to change. Any price and availability information displayed on [relevant Amazon Site(s), as applicable] at the time of purchase will apply to the purchase of this product.) 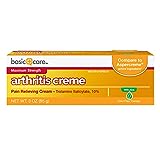 $4.10 ($1.37 / Ounce)
ACTIVE INGREDIENT: The active ingredient in Amazon Basic Care Arthricream Pain Relieving Cream is trolamine salicylate 10%, topical analgesic, which c... read more
(as of January 20, 2021 - More infoProduct prices and availability are accurate as of the date/time indicated and are subject to change. Any price and availability information displayed on [relevant Amazon Site(s), as applicable] at the time of purchase will apply to the purchase of this product.) 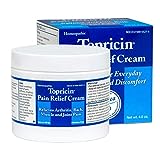 $15.49 ($3.87 / Ounce)
SAFE AND EFFECTIVE NON-PRESCRIPTION PAIN TREATMENT - Topricin is the safest alternative for people who can’t tolerate prescription and non-prescriptio... read more
(as of January 20, 2021 - More infoProduct prices and availability are accurate as of the date/time indicated and are subject to change. Any price and availability information displayed on [relevant Amazon Site(s), as applicable] at the time of purchase will apply to the purchase of this product.)